The third quarter of 2019 saw markets give up some of the gains made in the first half of the year.  Oil jumped and retreated after an attack on a Saudi Arabian oil plant. Global markets are not sure what to make of the tit-for-tat trade war between the US and China. Locally, we have Mboweni vs the ANC attempting to fix our broken economy.

Trade Wars: A war with no winner

There is an ongoing battle for justice as Trump puts it. Starting with tariffs, the $50 billion worth of goods early in 2018 has now escalated to tariffs on more than $200 billion worth of goods from China. The net effect of these tariffs put a damper on global growth. Chinese imports from all countries fell by 8.5% compared to a year ago.  This has put pressure on export-driven countries with emerging markets feeling the brunt of the pain. The US was not spared as imports by China from the US declined by more than 25% over the same period. The chart below shows the extent of the damage.

All eyes are on talks between the two countries, labelled as the ‘phase one deal’. Any form of agreement would bring relief to the markets. There is a possibility that talks between Trump’s team and China breaks down. The knock-on effect from this could be further tariffs, as Trump has highlighted before that the tariffs could be imposed on all Chinese goods, estimated at roughly $550 billion. Guessing the outcome would be a fool’s game. With the risk of recession a distinct possibility for the US and presidential elections coming up in 2020, Trump might be eager to get a victory from an economic standpoint. A deal between these two powerhouses could lead to improved global trade and subsequent growth. 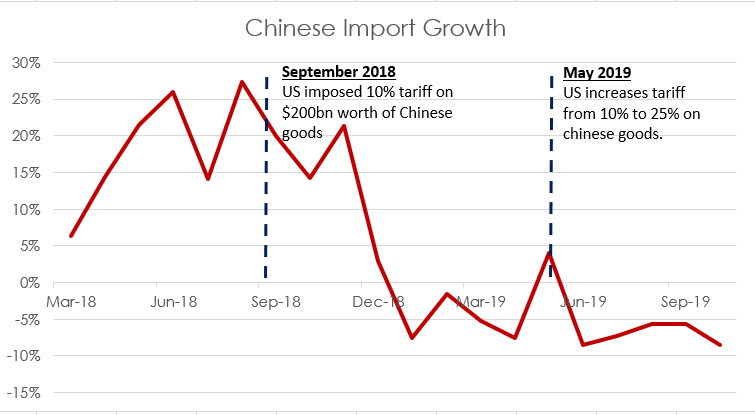 Brexit: We are tired of the story 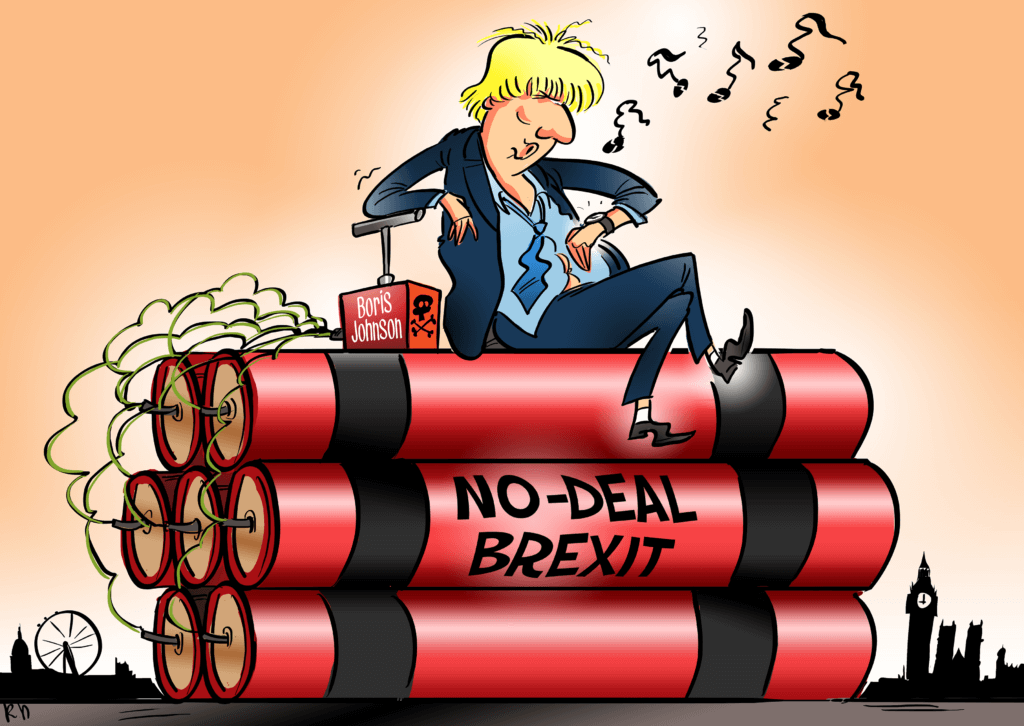 Source: politico.eu by Rytis Daukantas
The only exciting part of the Brexit debacle is that it might be over soon. A dragged out process that started in 2016 with a looming deadline of 31 October has the UK scrambling to get a last-minute deal approved by parliament. Newly elected prime minister, Boris Johnson went rogue by trying to suspend parliament but subsequently failed. Johnson does not want to extend the deadline but is obliged by law to do so if parliament rejects his deal. We will follow this closely over the next couple of weeks as the deadline approaches.

How to fix South Africa

Tito Mboweni, Reserve Bank governor in the 2000’s when growth was rife within the SA economy, has the unenviable task of saving South Africa’s finances. During August he released a detailed plan to kick-start the South African economy. Comments from the National Executive Committee meeting indicate that the plan was met with some resistance. Could this be the catalyst for  the economy or will it just be another policy paper with no intended action? The resistance to implementing the necessary but politically unpalatable steps is increasingly concerning.

Our eyes will be fixed on the Medium Term Budget Speech (MTBS) delivered by finance minister Mboweni on 29 October. Some are labelling this the most important MTBS yet. Mboweni will update South Africa on the pace of tax collection, government spending, economic growth targets and plans to boost growth. Moody’s is set to review South Africa’s credit rating on 1 November. The MTBS is clearly critical for that decision. Moody’s lead analyst, Lucie Villa, recently mentioned that there is a low likelihood of a downgrade in 2019.  However it seems likely that they will downgrade the outlook to negative, which will increase the likelihood of a downgrade in 2020. South Africa will fall out of the World Government Bond Index which means that it will become more difficult for the government to fund government debt. It is also likely to lead to increased interest rates and a decline in the currency.

After a strong start to the year global markets, not surprisingly, had a poor third quarter. Fears of a recession in the US and Brexit uncertainty remain key drivers in the equity markets. Locally, markets retreated and the Rand weakened.

The JSE All Share Index is up 7% in 2019, despite a decline of nearly 5% this quarter. Resources are still leading the way with strong growth up by 13%. Interestingly, of the 160 counters on the JSE, 53% of them are in negative territory this year. Sasol has been the biggest detractor from the All Share Index, down 40% year to date. Sadly the project responsible for Sasol’s demise is not even in South Africa. If we stripped Naspers out of the data the JSE only yielded 1.8% this year.

Key events taking place in the final stages of 2019 are critical to the outcome of the year.  It is not a time for irrational bets or investing based on event outcomes. We remain confident that a globally diversified, liquid portfolio based on your circumstances and risk appetite is the best approach in these uncertain times. Drastic changes may feel right, but can also be detrimental and even destructive.

If the Springboks win in Japan it could just be the catalyst we need to unite our country. Who knows what the ripple effect might be… Go Bokke!!