The first quarter of 2022 was characterised by a reversal of trends and surprising winners. The USA raised interest rates for the first time since 2018 following months of speculation. But have they left it too late? Out of control inflation suggest they may have. In Europe, Putin’s troops invaded Ukraine which sent commodity prices soaring. This raised fears worldwide, but for South African investors, it was surprisingly good news.

Did the Federal Reserve make a mistake?

In the US, inflation increased to 8.5% in March - the highest recorded prices rise in more than 40 years. The price hike of food and energy was in part due to Eastern European tensions and the effect of sanctions.  However, it also appears that there may be a systemic issue relating to the labour market. Currently, the US has over 11 million job openings with only 6 million people looking for work. This may be a dream scenario for Americans - if you don’t like your job you can quit and potentially find a new job within hours. However, it also means that skilled workers are in high demand.   The net effect of this is higher wages which in turn leads to higher inflation.

The graph below illustrates that wages, even before the latest inflation numbers, were already growing at 6%. 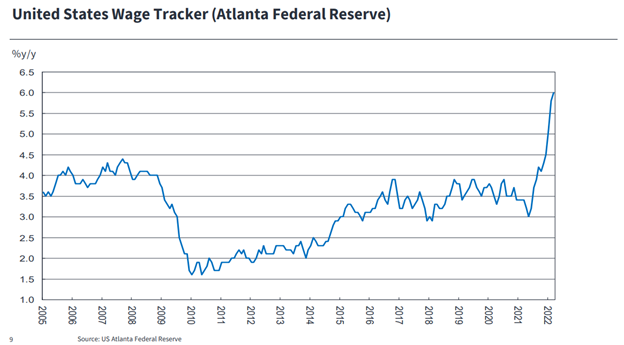 How has the Federal Reserve responded to this?  In an effort to slow economic growth and curb inflation, they have started to increase interest rates and plan to sell bonds to the value of $95 billion per month.  Analysts believe that markets have already priced in a 2-2.5% rise in US interest rates for 2022.  However, the inflation problem may be bigger and more systemic than previously thought.  Harsher measures may become necessary.

The concern is that markets are not factoring in the potential for a recession in the US. Wage expectations and companies’ intentions to hire will be sign posts for whether US inflation is being brought under control.

Russia invaded Ukraine on the 24th of February. The invasion has lasted longer than initially anticipated and the outcome remains uncertain.

Wars typically have short-term impacts on financial markets.  However, Russia’s influence in the commodity market may make this war different.  Russia is the primary source of gas delivery to Europe and, together with Ukraine, a major food producer for the European region.  In the short term, the markets may be able to handle the pressure of an interruption to these commodities. However, the extended duration of the war will undoubtedly have a prolonged impact on commodity and food prices which means markets will take longer to recover.

The South African investment landscape not looking as bad compared to peers?

Rising commodity prices and the post-pandemic local recovery have meant that SARS collected more than R1.5 trillion in tax revenue, up 25% year on year and 15% compared to pre-Covid levels. Edward Kieswetter and team did a great job but they had some tailwinds with the mining sector reaping the rewards of elevated commodity prices.

To their credit, government has used some of the revenue to pay off debt. Our debt to GDP ratio decreased to levels below the global average which is certainly a positive outcome. We have even seen Moody’s revise their negative outlook on South Africa to stable.

The Reserve Bank has also done a stellar job at keeping inflation within the target range of 3-6%. They acted decisively in raising interest rates and it has led to a contained inflation rate that is now 2% lower than that of the US. With inflation under control and strong commodity exports, we have seen the Rand stabilise around R15 to the dollar. Keeping the Rand in check is fundamental to containing inflation.

South Africa’s inflation is unlikely to become systemic because we have the opposite problem to the US in our labour market. Our unemployment figures are dire with 35% unemployment – if you include discouraged workers this number is closer to 50%. We will not be able to improve these figures without sustained investment into our country. The graph below indicates that fixed investment is at an all-time low and we need to fix this if we are to stimulate growth and increase employment. 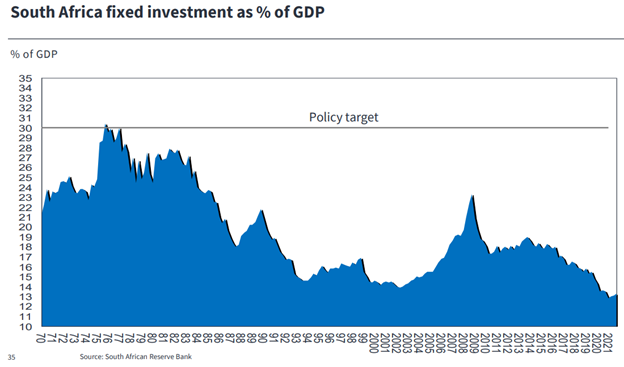 Despite the lack of investment, SA markets have done really well. The graph below illustrates the recent divergence between the MSCI Emerging market Index and the JSE All Share Index. This is mainly due to commodity prices and the resource sector performing well. If government manages some form of policy certainty, we could very well see an increase in foreign flows that can be used for fixed investment. With an ANC electoral conference coming up in December it is possible that investors are waiting for the outcome.  A Ramaphosa victory would be good for business and we could see some necessary reforms, albeit slow. We do not need to get a lot right to become the preferred destination for investment amongst our emerging market peers, like Russia and Turkey. 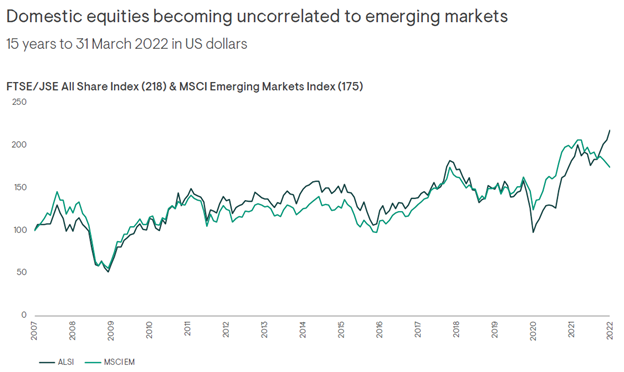 Given the concerns about rising interest rates and the war in Ukraine, it is not surprising that global markets had a tough quarter down 5.4%. In a major divergence from the global markets, the JSE All Share Index rose by 13% in dollar terms.  This despite Naspers, the biggest share on the JSE, shedding a third of its value due to concerns around regulation in China, and reports of money-laundering which could lead to hefty fines. A knock-on of this was that other SA equities delivered stellar returns (ex-Naspers) - financials and resources were up 20% and 19% respectively. On a longer-term basis, local equity has an annualised return of above 11% over a 5 year period, catching up to the returns shown by global equities.

What the past quarter has shown is that past performance is not necessarily an indicator of future returns. When markets have high expectations of past winners, it creates the opportunity for disappointment when the unexpected happens. Naspers and global equity markets are good examples. On the contrary, investors expected little from the South African equity market, but when the fundamentals unexpectedly improved, there was room for a pleasant surprise.

We get a lot of questions on where the war going and what impact it will have on the markets. Lao Tzu once said: “Those who have knowledge, don't predict. Those who predict, don't have knowledge.” We prefer not to predict.