What were the main themes in quarter 3?

The news flow has remained relentlessly negative over the past quarter. Interest rates continued to ratchet up as monetary authorities played catch up with inflation. The war in Ukraine has escalated. Loadshedding plunged South Africa into the dark for longer periods than ever. In the UK, the Finance Minister resigned (and now also the Prime Minister ) after a shocking budget sent the Pound spiralling. Even the one constant over nearly a century left us - the Queen of England passed away.

In the financial markets, nearly all asset classes were in the red. The theoretical 60% US shares and 40% US bonds have performed worse in only two other calendar years since 1926. 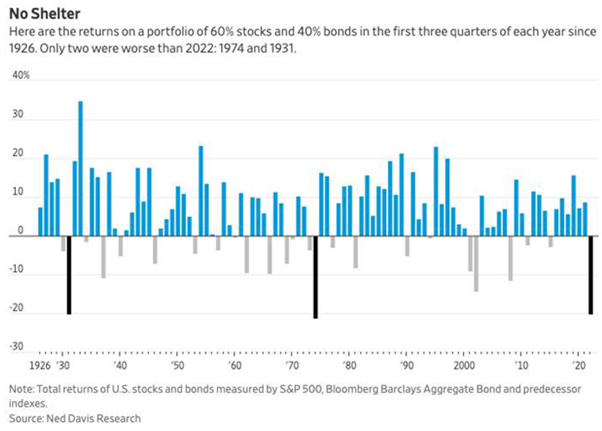 The main reason for the decline in financial markets is the unexpected and rapid rise of interest rates around the world as a result of rampant inflation.

The chart below shows the one-year inflation numbers for a few European countries. We can take comfort from the fact that for once, it is not as bad in South Africa as it is globally since South Africa’s inflation rate is currently measured just below 8%.

Rising energy and food costs due to the war in Ukraine are the main drivers for these disconcerting inflation numbers.

In Britain, the price of bread has increased by nearly 20% over the past year whilst in countries closer to the war, like Hungary, a loaf now costs nearly 80% more than last year.

Energy prices in Europe specifically have surged to unimaginable highs - as much as 400% in some European countries as shown by the graph below. The war in Ukraine and the supply of gas from Russia to Europe is the main factor driving the prices. Whether the EU can put in the correct measures before winter hits is unlikely. They too might be forced to implement a form of energy rationing. 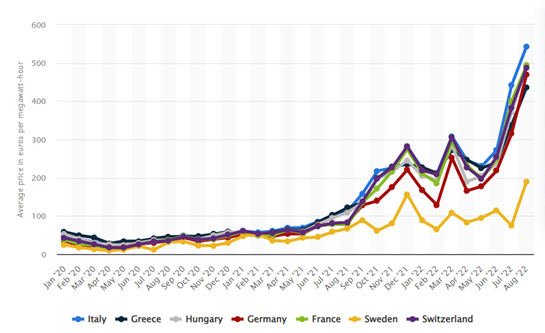 Monetary authorities are now combatting inflation at all costs with unprecedented interest rate hikes. And we expect more to come.

It means that global economic growth is at best likely to be mediocre. Worse even, there is a high probability of a global recession next year although it is not the base case for most economists right now. An escalation of the war in Ukraine will dampen the economic outlook further.

As living costs rise and economic prospects become bleaker, we will continue to see an increase in labour unrest as workers fight for wages to keep up. We have already seen a shift towards populist governments in Europe. The most recent elections indicated exactly this as Giorgia Meloni became prime minister of Italy. Looking at France, Marine Le Pen is also gathering support. This is concerning for the EU as Frexit, Italexit and others may be back on the table. 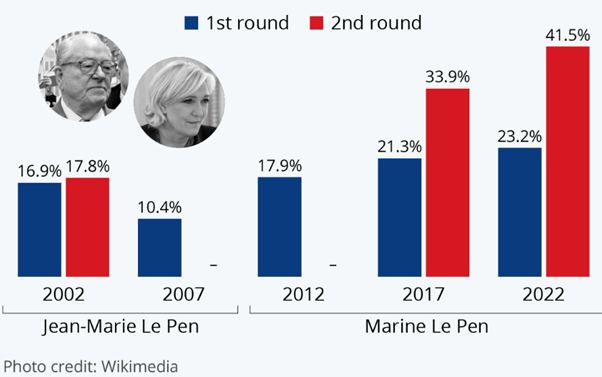 What has happened in South Africa?

In South Africa, things are no different.

The South African Reserve Bank has hiked interest rates 5 times to 6.25% from 3.75% in 2022. They are expected to increase rates for as long as inflation falls outside of the 3 – 6% band. Given the already subdued demand for goods in South Africa and that our inflation is mainly imported, the trajectory will be determined by what happens elsewhere in the world. However, the outlook here is more benign, and inflation is expected to peak at around 8%. 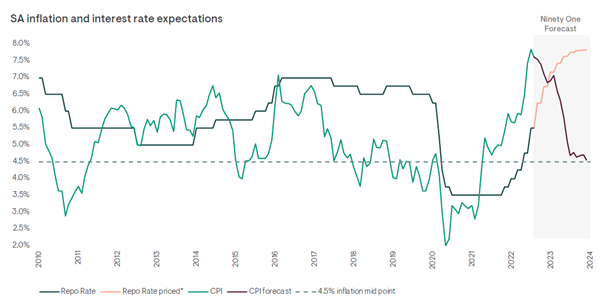 Locally, we have also seen more labour action. The Transnet strike that shut down our ports has had a knock-on effect on agricultural and mining exports.

We are also suffering energy shortages, although they are mostly of our own making. After fifteen years of energy rationing in South Africa, we are now experiencing the worst disruption ever. Loadshedding has also impacted the water supply in Gauteng. In other areas, service delivery has collapsed. 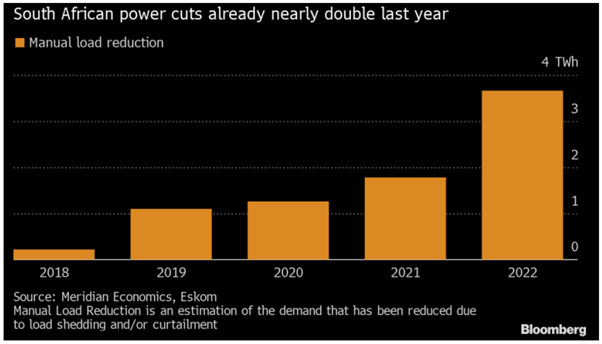 This lack of delivery, in addition to the treatment of corruption, is likely to be one of the main themes at the ANC elective conference in December. At face value, these failures can’t be good for the sitting president’s support. In addition, we are concerned that opposition forces from within the ANC and outside are actively involved in sabotaging the electricity supply and the economy for political gain.

The ANC has never been this fractioned or directionless. It seems the party is incapable of putting their fiduciary duties in government ahead of party politics, not even when the urgency of the situation is apparent to everyone else.

Furthermore, the potential greylisting of South Africa became a real threat over this quarter.  If this occurs, South African businesses and individuals will be required to jump through more hoops to invest internationally and to pass money laundering and terrorism funding risk assessments. In general, South African regulations and structures are not to blame for this threat. The government also seems intent to make the required regulatory changes. The real problem lies in the ineffectual policing and enforcement of the legislation - which is more difficult to fix.

It is highly likely that South Africa will find itself greylisted soon and that it will impact the ease with which we can do business globally, and hence, it will eat away at our already low economic prospects.

What has happened in financial markets?

It is unusual to see negative returns for almost every asset class but that is what the picture looks like now. Only South African cash and bonds delivered positive returns over the past quarter. Growth assets like property and equities suffered more losses over this quarter.

Safer asset classes and the strength of the dollar contributed to the resilience of our clients’ well-diversified portfolios. During the past quarter, portfolio values remained stable in the face of difficult headwinds.

What can be expected in the last quarter?

Although the outlook for global economic growth and inflation seems dire, it appears that financial markets are now more realistic about the prospects. The financial markets could settle down, while economic prospects continue to falter in line with expectations.

Two key indicators to watch in the last quarter of this year will be the job market in the USA and global company profits. The best outcome will be for these indicators to stall but not point to rapidly declining economic activity.

Of course, the escalation of the war in Ukraine as the northern hemisphere enters winter will impact the European energy supply and prices further.

The resignation of the UK Prime Minister after the quarter end will cause further uncertainty in a key global nation.

Locally, headlines are likely to be overshadowed by the ANC’s elections at the end of the year.

It will no doubt, be another unsettled quarter. In times like these, it is helpful to watch what happens in markets because of fear. When fear peaks, it normally indicates times of opportunity.

Famous investor, Baron Rothschild said: “The time to buy is when there’s blood in the streets”.