THE QUARTER WE’D RATHER FORGET! WHERE TO FROM HERE?

Aren’t we glad that 2018 is behind us? That said – we’re all asking if there’s light at the end of the tunnel or if that’s actually a train approaching?

The fourth quarter of the year saw a decline in most major indices with the developed world leading the pack. Looking ahead we need to keep an eye out for risks as well as opportunities that will present itself. 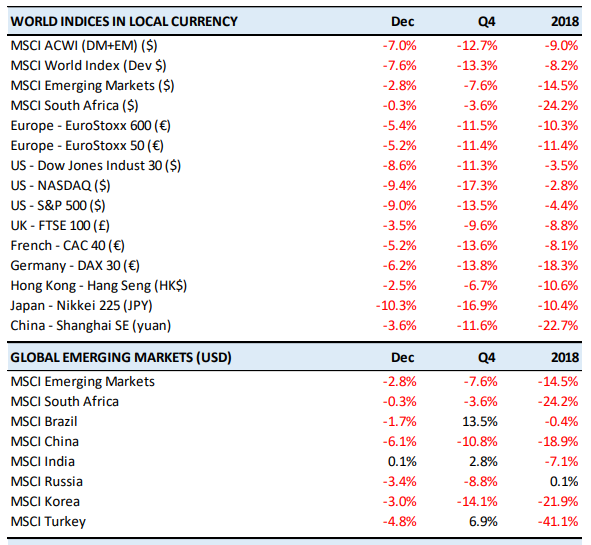 Markets suffered the worst year since the global financial crises in 2018. In addition, Deutsche Bank analyses showed 90% of asset classes were negative – the worst broad-based decline in their recorded history. The graph above illustrates just how bad it really was.

The perfect storm of events created the sell-off.

Brexit and the slowdown of global economies

The United Kingdom is set to leave the European Union on 29 March regardless of whether there is a deal or not. Subsequent to quarter end, the last deal tabled before parliament was rejected by a large majority. This fueled major anxiety about a no-deal exit which has now become a real possibility. The Bank of England has warned a no-deal Brexit would cause an immediate economic crash predicting Gross Domestic Product (GDP) to fall by 8%. Theresa May will need to partner with a very stubborn parliament to get a deal in place.

There are four possible outcomes:

The Chinese economy has also been slowing with figures reporting GDP growth of 6.6%, the slowest in 28 years. The trade wars certainly played a role and will continue to do so in the year ahead. With a current truce in place until the end of March we can only hope that the two nations come to some form of agreement. China seems willing to work toward a deal to buy more goods from the US. Whether Trump will be happy with that remains to be seen.

The International Monetary Fund (IMF) recently published its outlook on economic growth. While the forecast for global growth in 2019 has softened to only 3.5% they predicted a slight uptick in 2020. When asked about the rising risks and slowing economy, Christine Lagarde, Managing Director of the IMF, answered, “Does that mean that a global recession is around the corner? The answer is ‘no’.”

The Purchasing Managers Index is a monthly survey that provides leading indications of business conditions in the manufacturing sector. The reading in December was the highest in 2018 and a general indicator for growth in this industry.

This could signal an uptick in economic activity, however there are certain headwinds. Load shedding could be a big factor that could negatively impact productivity.

The technical recession experienced in the second quarter of 2018 was short lived with third quarter figures coming out better than expected at 2.2% growth from the previous quarter.

Despite inflation remaining in the range of 3 to 6%, the Reserve Bank hiked the repo rate by 0.25% in late November, sighting longer-term risks to inflation as the reason for this pre-emptive move.

Eskom and load shedding seem to be the biggest risk facing a continued local turnaround in 2019. In late 2018 a coal supply constraint caused most of the bouts of load shedding. Public Enterprise minister, Pravin Gordhan wants to avoid Stage 2 load shedding in the coming months.

Locally, we also have national elections to be contested in May. The populist rhetoric will continue up to the elections and should be largely ignored. A strong result for the ANC will strengthen the president’s hand in the necessary steps to create more policy certainty.

With corporate South Africa’s strong cash position, a good outcome could lead to an uptick in sentiment and subsequent investment into our economy and financial markets. 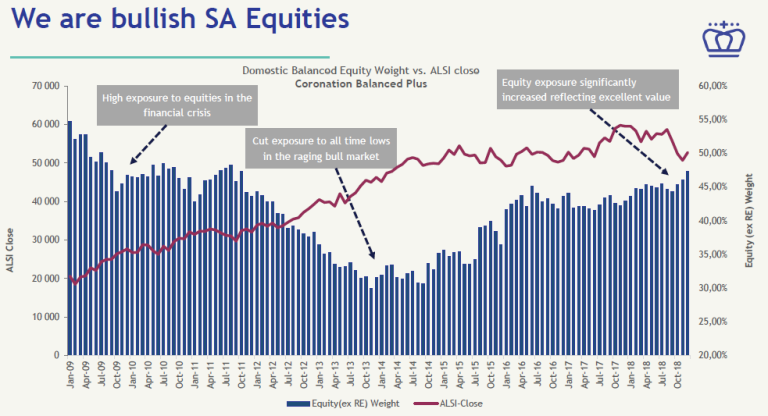 Local markets are looking very cheap now. This comes after five years of poor returns. Some of the top shares on the JSE, such as British American Tobacco, Naspers and Aspen are trading at half of their Price/Earnings multiples of three years ago – in layman’s terms “a half-price sale”.

The slide above is an indication of asset managers in South Africa increasing their exposure to local equities. The snapshot is a view of Coronation’s Balanced Plus Fund’s significant increased allocation to local equities and suggests local stocks provide excellent value at current levels.

Bonds and cash were the only two asset classes that provided positive returns, both yielding above 7%. The property sector was hardest hit with a decline of 25%. Resources stood out as the only sector with positive returns of 15.5% for 2018. The Rand weakened 16% to the dollar as we entered 2018 with optimistic, perhaps unrealistic, expectations of the new ANC president. The rising interest rates in the US also led to a strengthening dollar.

These are trying times for any investor. There is a temptation to jump ship to safer assets with so much uncertainty and bad news. We must reiterate that a change in strategy at such a low point could be catastrophic. Despite all the bad news, markets seem very cheap and could recover extremely fast when sentiment changes. If you were not invested for 5% of the best months since 1960 you would have a zero return from equities over the entire period. The year ahead could include one of those months. Missing out could lead to permanent value destruction in the long-term.

In uncertain times a long-term strategy is the best suitable option. A diversified approach towards investing will hedge against any one specific event. Speculating on which industry, asset class or country would come out tops is a difficult long-term strategy to maintain. As William Feather said: “One of the funniest things about the stock market is that every time one person buys, another sells, and both think they are astute.”