Should I Accrue Wealth with My Spouse?

A few months ago we took a bird’s-eye view of the different marital regimes in South Africa (read the article here). This month we’re focusing on marriages outside of community of property, with the inclusion of the accrual system. This seems simple on paper, but can get technical and confusing.

Out of Community: The Two Basics

Being married outside of community of property is commonly referred to as being married with an “ANC” (ante-nuptial contract). While the provisions of the ANC can be as detailed as you want it to be, it usually means that spouses keep the assets that they acquired before the marriage separate. In addition, spouses do not have a claim on those assets at dissolution of the marriage through divorce or death.

From here on (after the wedding, that is) there are two options:

Anyone who entered into an ANC after 1984 is automatically married with the accrual system, unless accrual is specifically excluded.

What is excluded from the commencement value?

Not all the receipts of funds and assets during the marriage will necessarily be included in the accrual calculation. This list includes:

When the marriage is dissolved by death or divorce, the net value of each estate is determined. The larger estate then has to pay half the difference to the smaller estate. The simple format for the calculation is:

The commencement value in the ANC is first adjusted for inflation to make provision for any change in the value of money since inception of the marriage.

Regardless of the possible impact at divorce, the accrual system is also significant in estate planning. An accrual claim is always calculated and implemented before the bequests in a will are carried out.

If one spouse dies (or both simultaneously), the accrual will be calculated. This could play out in one of the following ways:

In the first case, the surviving spouse’s accrual claim will rank behind other creditors, but ahead of heirs. This could mean that heirs are unable to inherit if the estate is illiquid or insolvent.

It’s important that the ANC and the will speak to one another so that there are no unintended complications. If there are not enough liquid assets in an estate, it’s worth investigating the possibility of a life policy that will provide extra liquidity to meet an accrual claim at death.

To Accrue or Not…

There is no simple answer to this! It’s not a question of “what’s right?”, or “what’s better?” 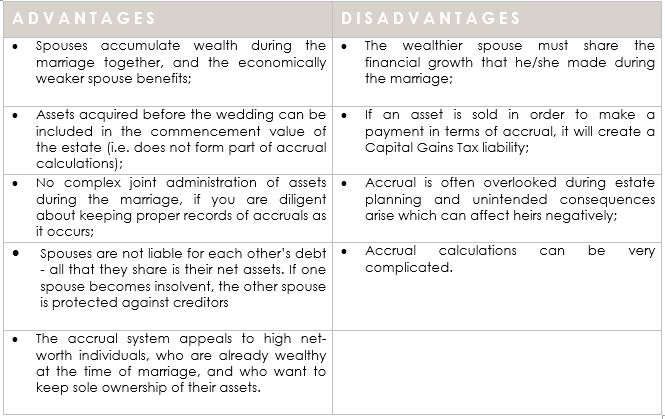 Whether or not you choose to include the accrual system will depend on your relationship and your specific needs. This is something that you need to decide as equal partners.

Important Boxes to Tick Off

Foundation is able to assist with estate planning and accrual calculations. Contact us if you would like more information. Know the numbers and the possible shortfall while you can still plan and make provision for it.