INTERNATIONAL “Every once in a while, the market does something so stupid it takes your breath away.” This famous saying by Jim Cramer pretty much sums up the second quarter of 2016, more specifically the last week of June.

Bookies and investors alike got the Brexit referendum wrong.  The implications of the ‘leave’ vote were probably too ghastly to even consider. So, on Friday, 24 June we all woke up to the shock that Britons had voted to exit the European Union. This sent markets into free-fall and caused panic across the globe. As a result – the Pound hit its lowest levels in over 30 years.

As Britain catches her breath - markets are still reacting to every piece of new information. It’s likely that we’ll have a more rational reaction to the actual implications of Brexit down the line.

The graph below illustrates the emotional trading that took place in the week after the referendum and the swift recovery of the London Stock Exchange. 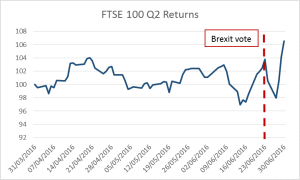 On a local front it was a relatively good quarter. Rating agencies S&P as well as Moody’s kept South African debt at investment grade – and Moody’s kept our economic outlook as stable. Talks of investigations around Finance Minister Gordhan’s alleged overseeing of a rogue unit at SARS subsided, and the Rand strengthened against almost all currencies.

Interestingly the appetite for emerging markets has increased. This could be due to the issues around Brexit and the uncertainty it brings. It also looks likely that the US Federal Reserve will not increase interest rates over the coming months and possibly 2016. This bodes well for developing economies.

The graph below illustrates the net flows from foreign investors into South African equities. 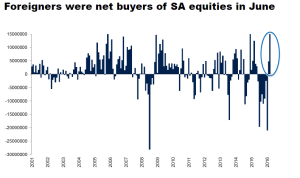 In the local equity market, Resources was the stand out performer in the second quarter adding to the gains it made in the previous quarter. This brings the total return this year to just above 25%. Local bonds have made an exceptional recovery from their low point in December (post Nenegate).

Local bonds returned 4.4% in the second quarter bringing the total 2016 return to an impressive 11.2%. It is also an indication that investors are looking at high yielding securities, given the Fed’s delay in interest rate hikes and negative yields across Europe and Japan.

Emerging markets seem to be appealing once again as we see them outperforming developing economies in the first half of the year.

All major commodities were up in the second quarter with Gold, Platinum and Oil leading the way. Gold has always been a safe haven asset and has yielded 25% in dollar terms in 2016 up to $1330/ ounce.

The graph below illustrates the recent upswing in the gold price. 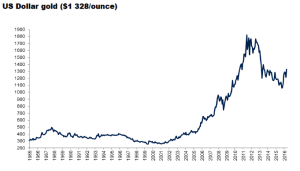 We can look forward to another interesting quarter as we watch how things unfold with the British exit from of the European Union, and a possible spillover effect to other countries in the EU.

In South Africa we have the municipal elections coming up on the 3rd of August.

The ratings agencies will meet again in December to determine whether South Africa has done enough to maintain our investment grade status. This will be a critical decision to ensure foreign investment into our country (see our note of 1 June).

The International Monetary Fund recently lowered the forecast on economic growth in South Africa from 0.6% to 0.1% for this year. This could sway the ratings agencies to a potential downgrade. Inflation declined to 6.1% in May. This is close to the South African Reserve Bank’s target threshold of between 3% and 6%. Given these figures, slow economic growth and a stronger Rand - an interest rate hike is likely to be delayed.

In the months ahead we will see how the European Union operates without Britain.

We will also see a presidential race unfold in the US. This uncertainty will make for volatility in market prices.

Financial markets are always uncertain. The year ahead is no different. The outcome of the local municipal election could bring with it significant changes to our economic realities. Add to that the potential credit rating downgrade for South Africa in December; the American presidential elections; and the knock-on effect of Brexit.

Recent history has shown (once again) that portfolio positioning in anticipation of these events is impossible, other than through diversification. The impact of these events are so unpredictable and sometimes counterintuitive – think of the market reaction after Brexit! We leave you with these wise words: “The big money is not in the buying and the selling, but in the waiting.” Charlie Munger.