While it is always difficult to predict where we were heading at the beginning of 2016, we could feel a bit more optimistic than we were at the start of the year. The constitution held up and a big victory for our democracy as the message was clear, no one is above the law in South Africa. We had a difficult start to the year as volatility was exceptionally high and everyone was waiting for direction. The smallest variances in oil prices caused excessive market volatility. As oil suppliers were looking at ways to produce less, some positive data out of China and a weaker dollar forced the oil price up. Markets soared and brought about a very decent first quarter return, especially for emerging markets. The JSE returned 4% in the first quarter of 2016 and the Rand gained 6%, a healthy return given the current economic conditions. The graph below illustrates the sector returns over the last 12 months.

Locally, resources were boosted by rising commodity prices. Gold (in US$ terms) rose by 16% in the first quarter, the best quarter in 30 years. The major impacts on the gold price were two-fold, the expectation of further imminent interest rate hike by the US Federal Reserve lowered and investors are possibly looking for a safe-haven investment given the global economic climate. The graph below shows the recovery in share prices of a few resource based stocks. These shares are still not trading at prices seen last year June. This just indicates how oversold the resource sector was and suggests that a recovery in prices was due. Kumba Iron Ore is a good example. Over the last 12 months the price declined by 57% from its high in May of R185 a share. In the last quarter of 2015 it lost 47% of its value alone. The price has since increased by 93% but has only recovered to its October 2015 level of R80 a share. 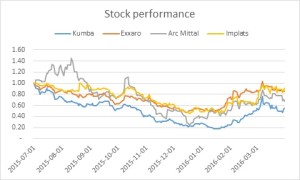 Local property recovered from the losses it made in the last quarter of 2015. Emerging markets economies, specifically resource based markets, did very well. As geopolitical concern eased and the oil price recovered the markets recovered all of its losses from the first 6 weeks of the year and ended the quarter flat, with the MSCI All Country Index returning 0.24% in dollar terms. Most of that growth coming from emerging markets which increased by 13% in March.

Below is an indication of the historic oil price. As oil was trading at $40 a barrel in March it sent a wave of optimism into the markets and that was seen throughout the equity markets. The positive sentiment was mainly driven by speculation of a production output freeze and the ongoing debate on whether the price is affected by an over-supply or a lower demand for oil. With the OPEC countries meeting in April to discuss a possible freeze on oil production, a decision of this nature, could benefit the oil price in the short to medium term. 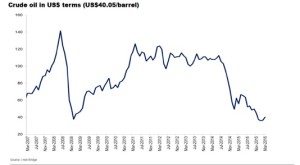 From an inflation perspective we are feeling the effects of the drought and the all-time low rand at the end of 2015 as food prices are soaring. To try and curb rising inflation the Reserve Bank hiked the interest rates twice in the first quarter which had a net effect of a 75 basis points higher borrowing rate. On the political front it was a very interesting quarter. From the Moyane vs Gordhan showdown, to Gupta-gate, back to Nkandla. One thing that stands out to me is that we have a ruling party that does not really know what the next move needs to be to keep voters at municipal elections.  It seems that infighting in the ANC has left the party directionless and effectively leaderless. The possibility of a ratings downgrade of South African debt is a looming possibility. Ratings agency Moody’s was in South Africa at the end of March to assess a further downgrade. , The next 3 months will be critical to try and persuade these agencies that a plan is in place to curb spending and improve the South African growth rate. Huge geopolitical shifts are at play globally:

In coming months, the sentiment for South Africa and its market and economy, will be determined as much by our own political battles, than these global forces at play. If China and other emerging markets continue to improve, so will South Africa. South Africa has scored some own goals, but we need the global environment to improve to provide as well.