The United States, a Declining Power or the “Indispensable Nation”?

PortfolioMetrix’s Brandon Zietsman wrote an interesting piece on the possible shift of power away from America to the likes of China, and whether you should look at size in isolation or is there more to a power shift than just the production numbers of a country. An interesting read. American exceptionalism has defined the way Americans see themselves as much as others see Americans. It suggests a sense of uniqueness and implies that the US is different to other nations, from its genesis and history to its founding ideology and principles. It has also led to a sense of duty that underpins the notion of a global mission to align the world with these principles. It is easy to understand how critics have interpreted this as an innate sense of superiority, a view not entirely without merit. The rise of the US as a global super-power after the Second World War was as dramatic as Britain’s decline. Not only had the US established itself as the foremost western military power, but its economic ascendency was absolute. But, as with all good things, they must come to an end. 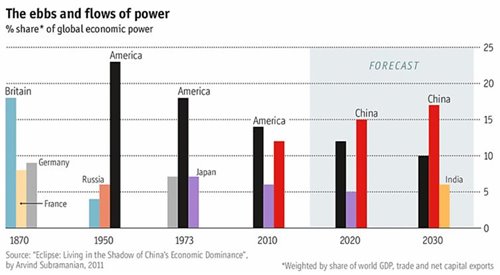 China has already surpassed the US in terms of its share of global growth, which partly explains the market’s obsession with China’s GDP numbers. In absolute terms, the US economy was worth USD17.4 trillion in 2014, whilst China’s was USD10.3 trillion. In hard currency terms, China is expected to surpass the US in size by 2026. However, when economic power is measured more broadly (as in the chart above), China may have already surpassed the US by 2020. A number of questions arise: will China’s displacement of the US as the world’s largest economy be as profound as when the US usurped Great Britain? Are the foundations of US exceptionalism still intact or has the country, its politics, its values and role in world fundamentally changed? What still makes the US unique and is this enough to maintain its economic hegemony? There is, as it happens, much about the US that is in fact unique, with the attendant possibility that the US may not only retain a position of dominance, but may even extend it. There are many anomalies that support the “special case” argument. Take the global financial crisis; it originated in the US and was triggered by activities in its financial sector but, when all came tumbling down, global assets fled to the safe-haven of US treasuries. From an historical perspective, US economic ascendency occurred under very different circumstances to those which China now faces. Firstly, its superpower and ideological rival was not Britain, but the Soviet Union. The Soviet Block was a closed economic system to which the US had no economic ties – for that matter, neither did the broader free market global economy. Great Britain, the incumbent, and the US shared a significant cultural overlap, congruent ideologies, were geopolitical allies and, critically, the US had the institutions and rule of law that allowed the USD to displace GBP as world’s trusted reserve currency. In other words, it was a benign displacement. The US and China are both superpower and economic rivals. In contrast to the US and Soviet Union, their economies are deeply integrated and interdependent. Whilst the US is highly reliant on Chinese imports, (over 17% of total imports), the corollary is that China is massively dependent on US wealth: 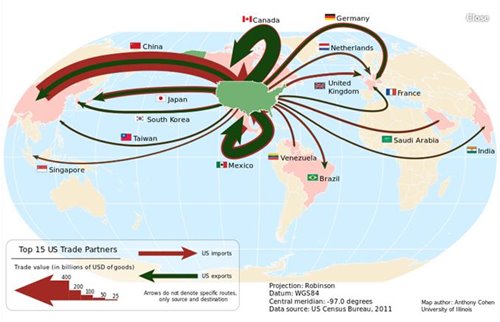 On top of that, China holds a huge portion of its foreign reserves in US treasuries – the demand for treasuries (and the cost of borrowing) has thus, to a degree, been underpinned by Chinese capital flows. China has lent a fortune to an ideological and geopolitical rival. 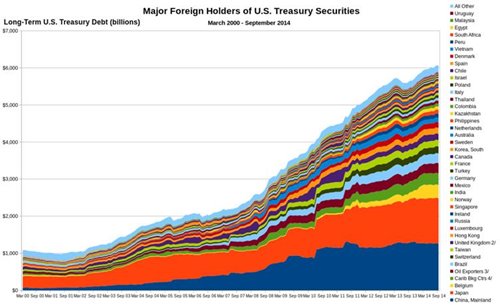 But is China well-positioned to take on global financial leadership? Trust in China’s financial system is a bit wobbly (as is it domestically if you look at capital outflows). The recent currency and stock market interventions cast doubt on their financial competency, whilst their culture of interventionism is the antipathy of what’s required for investor comfort – neither is there sufficient faith in the rule of law and institutions.

In the 1950’s, the US was reaping the beginning of the demographic dividend on the back of the Baby Boom, household earnings and the middle class were expanding rapidly and social mobility was high. The country projected youth, progressive values and confidence, with communist doctrine providing the perfect foil for apparent domestic ideological cohesion. America’s brand of freedom inspired oppressed people the world over; the ultimate success of the civil rights movement signalled that bigotry was on the back foot. Social permissiveness, Hollywood, Peter Stuyvesant and Coca Cola became aspirational. The Cold War provided a rallying point for unity and the Moon Landings were emblematic of a nation with a higher mission. Whilst bitter and emotionally-charged, even the anti-war protests of the Vietnam era highlighted the freedom to think, differ and express one’s views in a way unthinkable to most of the world at the time.

Fast forward to 2016 and you have a country deeply divided, fearful in spite of its power, doubtful of the values that have always underpinned its strength and a susceptibility to populist bigotry that is alien, not only to its history and founding principles, but to western norms in general. Social mobility has stalled, the working class has regressed and, whilst always conservative, the views of the American right are anachronistically trapped in a time warp (quaint or demented – take your pick). Whatever it is that is gripping Americans is also deeply at odds with the factual circumstances around their economy, society and position in the world.

The US is not the same country as it was in the decades that followed the Second World War. The country is politically polarised with a dysfunctional legislature, bi-partisanship is in tatters, red-tape has supplanted small government and, if the candidates represented in the presidential primaries are anything to go by, is suffering a collapse of leadership. At the heart of it is an identity crisis with sharply differing views on the place of government in society and America’s role on the world stage, having morphed from the protectionist instincts of 19th and early 20th century to the current role of de facto global policeman. One could be forgiven for arguing it is not only US economic power that is in decline, but also that American society and politics are in reverse too. But this view is too pessimistic.

What is the case for the “indispensable economy”?
[References are to charts and images below]

We can start with the role of the Greenback as the global reserve currency (image 1), the pre-eminence and (increasingly) dominant position of US investment banks (image 2) as well as an iron-fisted grip on the global monetary and payments system. The US has outright leadership in innovation and invention, has more scientists and engineers per capita than just about all her rivals and invests more than any other country in R&D (image 3). The US has proven adept at dominating and leveraging each new generation of technology. Eighteen of the world’s top twenty five brands are American (image 4) and, red tape notwithstanding, it’s still easier to hire and fire staff in the US than in most developed economies.

The US has six of the world’s top ten universities (image 5), is a magnet for global talent and has strong intellectual property protection. Whilst it seems to follow that developing countries should be the major beneficiaries of FDI, the US is still the investment destination of choice and ranks number one in the Global FDI stakes (image 6). The US also ranks as the most competitive of the major economies in the World Economic Forum’s Global Competitiveness Survey (image 7) and number one on the Efficiency Enhancer sub-index.

The US provides a massive deterrent to rival military adventurism through possessing the world’s most formidable military (image 8), along with an ability to project power quickly anywhere in the world. This gets you loyalty from allies that depend on that protection (Western Europe, Korea, Japan, Saudi Arabia etc.). Energy independence and the shale gas revolution is a geopolitical game-changer (image 9), whilst healthy demographics (image 10) differentiate the US from shrinking populations in Europe and parts of Asia.

There is another reason why the global economic model may remain in place for longer. Changing the economic order would be extremely complex and highly politically charged. It may be that it is less “costly” for all parties to retain the status quo. An analogy for this may be the Cold War and the implications of MAD in a nuclear era – the costs of outright confrontation overshadow any possible competing gain. There is also the issue of “possession being nine tenths of the law”; the US has an extremely firm grip on global power that it is well-positioned to consolidate. Relative to the myopic inaction of a consensus-saddled Brussels, the US response to crisis is typically quick, controversial, bold, decisive and, quite often, successful.

What we do need to be cognisant of are the risks to this optimistic (from a US standpoint anyway) scenario? Political dysfunction can have immediate ramifications as we saw when Republicans took the country to the brink of sovereign default. More worryingly, it also stands to stymy economic diplomacy, making it harder for the US to transmit a consistent message abroad and enter into meaningful international agreements. Running an advanced economy means being able to competently drive a very complex machine. A worry is the creeping politicisation of functions that properly lie in the professional/technocratic realm. In the longer-term, there are growing risks around mandatory entitlement spending, which will become unaffordable at some point (image 11); it is not clear where the political cohesion to solve these problems is going to come from.

The dominance of the US Dollar is not embraced everywhere and can be blamed as much for instability as for its positive role in underpinning the system. In SA and other emerging markets, where foreigners hold a very significant portion of domestic sovereign debt, decisions on rates by the US Federal Reserve causes massively disruptive capital flows into and out of these markets. Currencies that are pegged to the dollar are also subject to wild valuation swings on the back of Fed decisions. Whilst the US benefits from the privilege of cheap borrowing, it is also hurt by an over-bought currency during bouts of “flight to safety”. In summary, there are widely arrayed factions that would very much prefer the USD to be less dominant (including many Americans).

Having said all of this, nothing stays the same forever and key tenets of power may erode as new ones become more relevant or important. In the longer term, the West will continue to cede power to the East, and developed nations to emerging nations. All we are suggesting is that many commentators (including America’s scaremongering politicians and gullible voters) who see the US on the brink of catastrophic decline are jumping the gun and may have to wait a very long time for their doom and gloom forecasts to fully materialise. There are good reasons to believe that the US could extend its influence further for longer. 1. USD as a % of global reserve currencies 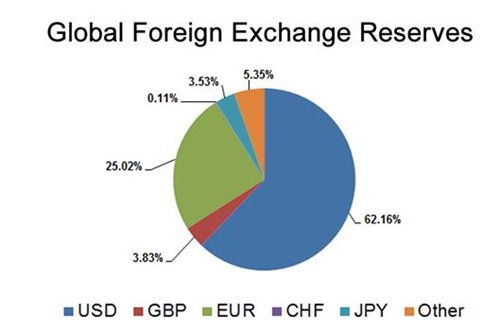 3. Investment in technology and R&D 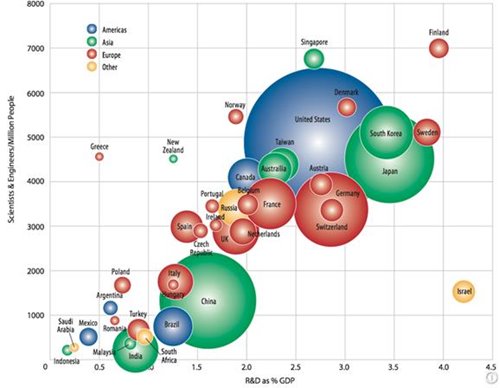 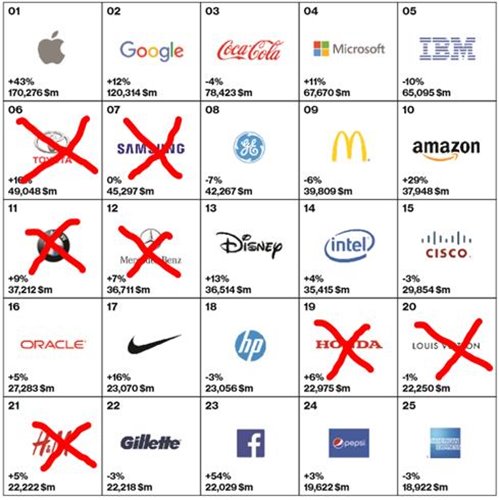 5. Top 10 rated universities in the world 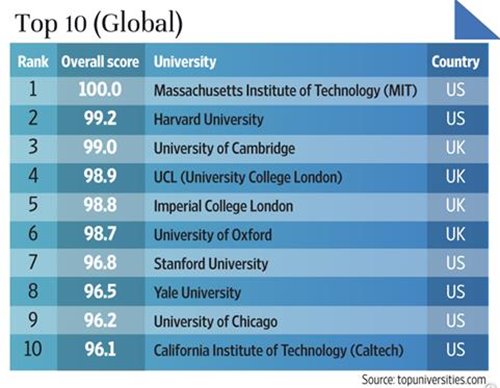 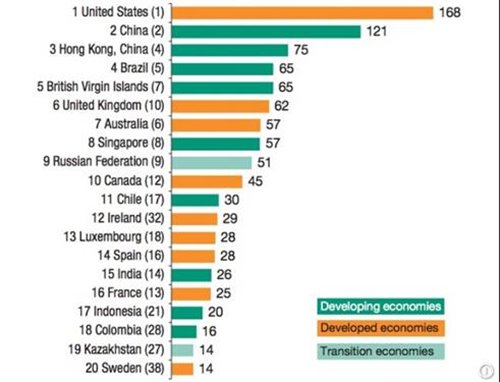 7. The US ranks highly on global competitiveness 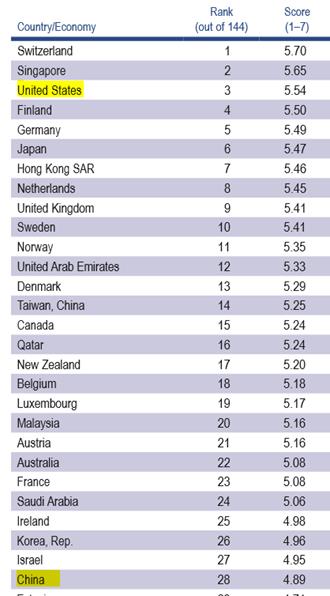 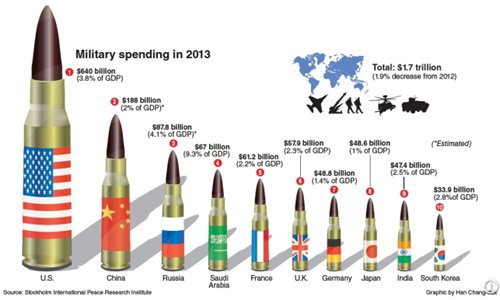 9. US energy independence is a geopolitical game-changer 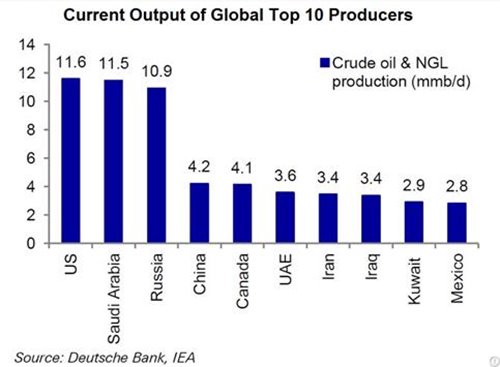 10. US population is growing while other developed powers stall 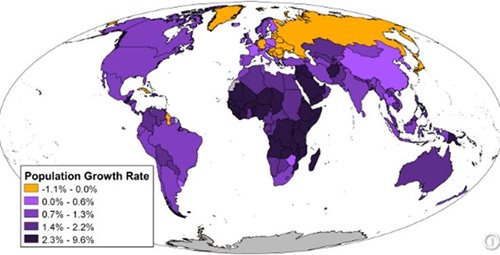 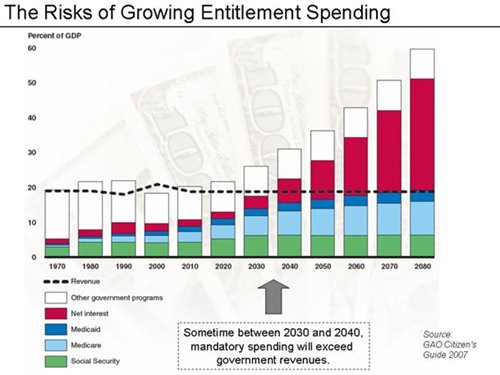