Prescribed assets: by the numbers

What are prescribed assets?

Prescribed assets refer to the use of a portion of pension savings to fund government debt or projects. This was first introduced under the Apartheid regime to fund the budget deficit as sanctions against South Africa inhibited the government’s ability to borrow money from foreign investors. Pension members were required by law to hold a minimum percentage in government debt.  It did not work back then and given the state of some of our current struggling state-owned companies, it is difficult to see how it will work this time around. Prescribed assets distort the flow of capital in an economy.

We have seen this policy being hotly debated in parliament, meetings and around the braai. Given that prescribed assets are expected to impact the returns and risk of retirement assets, we have done an analysis of the continued viability of these savings vehicles. Is it still worthwhile to invest in a retirement annuity, pension or provident fund?

What is risky about holding government bonds?

A typical government bond is issued for a predetermined period with a guaranteed income stream and guaranteed repayment of the capital. Government bonds are generally considered safe, but they are only as safe as the government issuing the bonds. The better a country’s management of its budget, the safer the debt is for investors. The South African government under the ANC prior to the Zuma era, had a good record of managing government borrowing.

Despite beliefs to the contrary, South Africa’s government debt has actually provided relatively pleasing returns over the past ten years. The NewFunds Govi ETF is an investable retail product that only invests into SA government bonds. The annualized return since inception is 7.5% with a 10.5% return over the last year.

Unfortunately, since the Zuma period, debt levels have grown and are still forecast to expand. The international rating agencies, who determine the creditworthiness of governments, are concerned about this rapid expansion.  Likely, they will finally downgrade South Africa’s debt from investment grade to ‘junk’ status in the next year unless the government announces firm plans to stem the tide.

However, should the ratings drop to below investment grade, and the government does nothing to stop the increase in debt, we may eventually get to a situation where the government will have to resort to borrowing more from its citizens by implementing prescribed assets.

What happened in the past?

The table below shows the performance of this forced asset class over three decades. Over the course of this policy, the allocation to this asset class varied with a peak of 53% of pensionable assets allocated to Prescribed Assets (which is a significant portion of your wealth). The returns were not all bad but in the 1970s prescribed assets had a negative real return (adjusted for inflation) of -4% per annum.

Case Study: What will the impact be on your retirement assets?

In our case study we have made several assumptions on the typical scenario we see every day:

Andile has a taxable income of R50 000 per month and invests R10 000 into a retirement annuity. He will receive a tax benefit of R3 421 per month – practically this will be paid annually when he does his e-filing submission. He invests his full tax rebate into a flexible investment.

John does not believe in retirement savings and invests his full R10 000 into a flexible investment.

At a taxable monthly income of R50 000, Andile gets a 34% return just by investing in a retirement annuity. He can invest R13 241 per month instead of R10 000 by utilizing this tax benefit. The graph below illustrates the impact of the two strategies over 10 years. 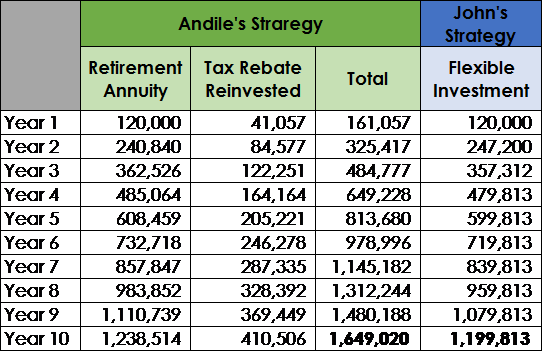 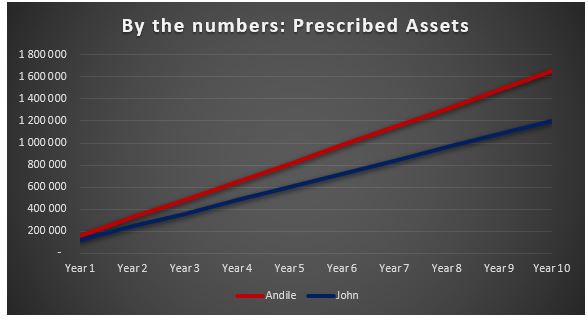 The big concern would be around the severe risk of capital loss. Bear in mind that Andile invested his tax rebate into a flexible investment that is not affected by Prescribed Assets. His retirement annuity needs to lose 36% in value to be worth the same as John’s total portfolio at the end of 10 years.

It means that the ‘Prescribed Assets’ asset class would have to decline by 74% over the 10 years to equal the return of the discretionary investment. This is over and above the annual loss of 4%.

These figures become even more convincing for higher-income earners who pay a higher effective tax rate. A person earning R150 000 per month who uses the maximum tax-efficient contribution of R350 000 per year would need the Prescribed Asset class to lose 93% of its value before a voluntary investment will provide a better return.

We do not believe it is in the best interest of South Africans for the government to implement this policy, but even if they do, there is merit in utilizing the tax break provided by retirement assets. It remains the best vehicle for the majority of South Africans to retire well because it forces saving. However, given the risks, we recommend that you limit your contributions so that you can also save through voluntary savings vehicles of which at least 30% should be invested overseas.