2015 was a tough year for markets around the world. The Rand crumbled to an all-time low. The currency lost 35% during the year and as at 31 December one dollar could get you R15.58 (compared to R11.56 at the beginning of the year). The only upside of this was that global investments held in dollars shined. Even the stocks on the JSE with big global exposure performed well. We wrote a comprehensive note on the rand in December following the Nene debacle. Follow link to article: http://www.foundationfamilywealth.co.za/?p=2869 2015 culminated in a perfect storm: We always suspected that China could not achieve economic growth of above 7% on an ever-higher base. 2015 was the year when this actually materialized and growth slowed to 6.9% – the weakest since 1990. Significant slowdown in growth meant lower commodity prices, which in turn meant lower demand for Rands and thus a big driver of the depreciation. China is one of South Africa’s most important trading partners and with Chinese imports falling by roughly 19% in 2015, this did not bode well for the SA economy. 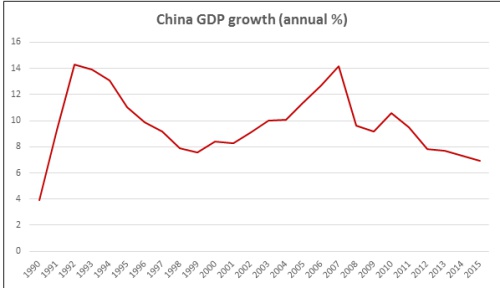 The snapshot below highlights the year in review:

While we can be glad that 2015 is behind us, the year ahead will certainly have its challenges. It has already been one of the toughest starts to the year in recent history: Global Economy As the developed world continues to show some recovery and increased economic growth figures, there remains challenges. The Eurozone could potentially benefit from lower oil prices, weaker currency and quantitative easing however, there are major headwinds such as as the ongoing Greek problem, migrant crisis and support toward anti-austerity measures that will need to be addressed. In the US monetary tightening began and the recovery is in full swing. Economic growth of less than 1% is forecast for South Africa. Record low oil prices Although the drop in the oil prices seems alarming, it means lower production costs, which then leads to higher growth. The rule of thumb is that a $10 drop in oil price can boost the global economy anything between 0.1% – 0.5%. The current reaction to the falling oil price is somewhat puzzling – it points to a nervous market and fears of very poor global economic growth. Emerging markets The general view is that 2016 will be another bumpy journey for emerging economies. Political uncertainty, weak commodity prices, dollar denominated debt, fiscal discipline, and labour unrest are but a number of issues that plaque these economies. The key driver to combat these challenges will be the respective governments’ ability to respond to these issues. Brazil, for example, continues to face very challenging conditions whereas other emerging markets, such as Hungary and Mexico, show better fundamentals. Balance of payments Certain economic sectors are benefitting from the weak rand – most manufacturing industries have expanded at double-digit rates since 2012. The progress made in these industries is masked by the increasing food imports due to the drought and declining mining volumes. Some economists point to a possible underestimation of the positive effects of the weak rand on the current account deficit, which in turn will help the fate of the Rand. Fiscal policy The newly appointed finance minister, Pravin Gordhan, has had his hand strengthened by the circumstances of his appointment. Recent comments indicates that the government is keen to send a strong message of fiscal discipline to rating agencies. However, given the weak economic conditions, it will mean higher taxes most probably for higher income earners in the form of a lack of relief for inflation, higher dividend or estate duty taxes. Inflation and interest rates Given the poor state of the economy, it is difficult to imagine interest rate hikes at this time. However, it is likely that interest rates will rise by about 100 basis points this year in order to curb the effect of the weak currency and rising food prices on inflation. Inflation is likely to rise above 7% this year. Municipal elections and policy direction Municipal elections will give an indication of the support for the ruling party, especially in urban areas. A weak performance may give the ANC reason to recall President Jacob Zuma. Markets and rating agencies will be looking for a clearer indication of the economic policy direction from the ANC. An important question is whether markets have factored all the gloomy news in. Most market sectors does not seem expensive. The Rand seems particularly undervalued, as it has been for a while. However, near term global and local headwinds will probably mean that the Rand will not recover in a meaningful way for a while. The world is not in a risk-taking mood. The most important determinant of returns for our investors is, in fact, not the economy or the valuations of the markets or the currency. It is the behaviour of investors at times like these that will determine their long-term returns. Market volatility is normal and unpredictable. Panicked sales will destroy value in the long-term. The best defense is the right level of risk in your portfolio. At Foundation Family Wealth, we spend time upfront to understand our clients’ risk profiles and appetites. We see as one of our most important roles to keep our clients invested in these appropriate portfolios at difficult times. Warren Buffet said: “Be fearful when others are greedy and greedy when others are fearful”.