How do I compare my investment returns?

I started my career in investments as a marketer. I was responsible for selling the investment company’s products to financial advisers. I learnt there, that investment returns could be shown in different ways; ways that were clearly meant to benefit the investment company – almost like holding a diamond at just the right angle to reflect the light so it dazzled the beholder. It’s one of the skills you pick up on the job and it’s stood me in good stead – not to bedazzle my clients but rather to figure out how to see through the ways in which returns are shown, so that I can arrive at a better understanding of the actual returns.

The last year has given us a fascinating case study of how returns can vary over short periods. Let’s delve into the underworld of investment returns so that the next time your friends brag about their superior investment returns, you can challenge with sceptical realism.

What is an investment return?

Let’s imagine that there was a unit trust fund called All Shares. Over the past year, that fund returned 36%. If you had invested R100 on 1 May 2020, your money would have grown to R136 by the end of April 2021. A spectacular return!

Why the exact timing makes a difference

The reason is obvious – that one period is measured from the bottom of last year’s pandemic panic and the other periods either before or after the initial fall out.

It’s not only where the investment ends that will make the difference, but also where you’re measuring from.

It shows why comparing two different investments can only be done over the exact same period. Even the same investment has very different return experiences over different periods.

It should be obvious, but just to be clear, the measuring unit makes a difference. This same investment would have shown a return of 73% in US Dollars over the year ending 31 April 2021; this compared to the 36% in South African Rands. The difference being the appreciation of the Rand against the US Dollar over the last year.

Let’s look at the longer term.

Over the past 15 years, that same investment delivered 11% per year. Did it come in a straight line? No, it included years with growth rates of close to 30% and other years where the investment declined.

In the graph below, we show the returns of the FTSE/JSE All Share Index on which these examples have been based. 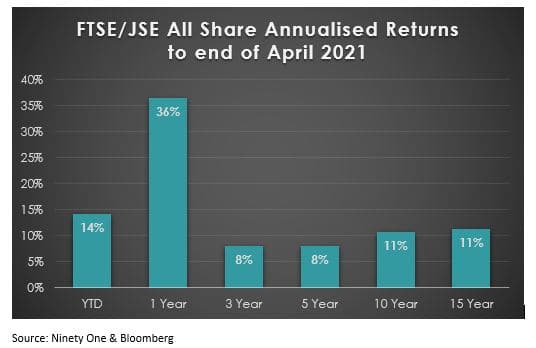 What can we expect of this fund?

Over the long-term, we can with a reasonable degree of certainty, expect the fund to deliver a return of 6% above inflation. Therefore, the fund still disappointed in the short-term, but the long-term return isn’t far off with an 11% annual return.

If the fund ends this year at current levels, the long-term return expectation will, in fact, have been met.

It’s not only the end that counts, the beginning does too.

Right now, the 5-year return of that same investment is also 8% per year. If you had invested your money in that same investment a year earlier and measured the return for a 5-year period up to the end of April 2020, your annual return would have measured -3% per year. The difference being that the starting point was just before Nenegate, after which markets tumbled and languished for a long time.

Even over the same period, your experience may differ.

Clients’ experiences of their investments are unique. Each client has their own internal return experience. As I said at the start, this experience differs from the product return shown on the product factsheet. What do I mean by this?

It’s the same total amount invested in the same investment, but the order makes a difference. It also illustrates that the product return is not the same as your investment return.

How do we manage the volatility of returns?

There is no sure way of telling what the return of any risky investment will be over the next year, three years or even five years. However, most of us don’t invest for the next year, three years or five years in risky assets. If our goal only stretches over a relatively short period, we should rather invest in less risky investments like money market or income funds.

For our longer-term goals like our retirement, we should instead invest in risky assets and keep our eyes firmly on that far away goal. It’s the same advice you’d give to a gymnast on a bar.

As a side note: your investment horizon for retirement is not the date of retirement but rather your entire retirement, which can last forty years for those living to a 100.

In this graph, we show how returns can vary wildly in the first year, but over time you’re more likely to hit the expected return of the investment. In this case, a South African share investment can be expected to deliver anything between about 35% above inflation and 20% below inflation in the first year; but as time passes, the return is likely to draw closer to the long-term expected return of 6% above inflation.

Even long time periods can be misleading when the starting point has either been unusually low or high. Think about the difference of a ten-year return measured from before the Covid-19 appearance and after the initial fall out – a 30% difference in your starting point will make a difference even over ten years.

For example, look at the long-term graph of the FTSE/JSE All Share Index. At times the index rose sharply for long periods, like in the decade before 2008, and at other times, like the period before 2020, the market showed lethargic growth for a long time. 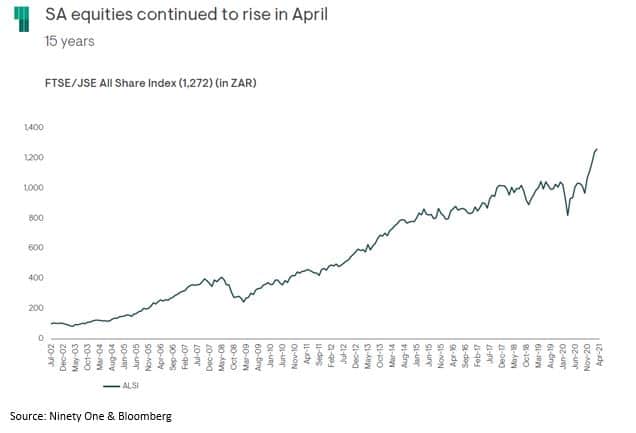 I haven’t addressed risk here, but note: not all returns come at the same variability. Two investments, both in South African shares, can give you two completely different experiences of variability, much like the car with better suspension will provide a smoother ride.

Investment managers are required, by law, to put the statement on every piece of marketing material, “Past performance is not indicative of future performance.” Why?

We’ve just seen that short-term returns vary wildly. They can therefore, not be taken as an indication of future returns.

But what about longer-term returns? When you have extensively researched long-term returns over many different periods as I suggest above, you may better form an opinion of the likely future return of a risky investment through good and bad times.

However, things can always change for that particular investment. If it’s managed by an investment company, the management could have changed. If it’s an index, the underlying constituents may have changed. Think about analysing the investment returns of, for example, an Allan Gray fund. How much change has there been in the management of that fund and the people managing that fund since inception? Or think of the All Share example above: how different does the JSE look today compared to twenty or thirty years ago? In the US, the market is currently overshadowed by technology companies, but perhaps food companies will overshadow the index ten years from now.

It is then, still subjective whether you can take past returns as an indication of future returns even after you have understood what changes have taken place.

We must choose yardsticks to make investment decisions. Using a measure like long-term historic returns, sliced and diced in all different ways, remains better than a short-term guess as to what can grow our money in the future.

What are the lessons we can learn?

The most recent returns shown by investment products are deceptive and random. One should be careful not to read too much into those returns.

To really gauge an investment product’s returns, one should examine long time periods – periods long enough to be in line with our own time horizons.

One should be careful about making big investment decisions when the most recent returns have been too good, especially when they’re much higher than long-term averages.

Long term returns are not without problems, but it remains better than the most popular alternative – guessing.