Markets raced off to a good start in 2021, building on from 2020.  The sustainability of the pace will, however, be determined by the continued global success of vaccination roll-outs. This quarter will be pivotal in determining whether we can achieve a Covid-free second half of 2021, at least in some parts of the world.

Countries across the globe have had varied success in the rollout of respective vaccines. The United States, under President Biden, planned to vaccinate 100 million people before his 100th day in office and they have comfortably done so. The UK also had a good rollout implementation as their country came out of strict lockdown in mid-April. Although both these countries still have a long way to go, the rate of vaccinations is increasing rapidly as the supply of vaccines increases. Markets are expecting that developed nations will be Covid-free by the end of this year. If the rollouts do not happen as planned, we could see markets retract from the current highs. 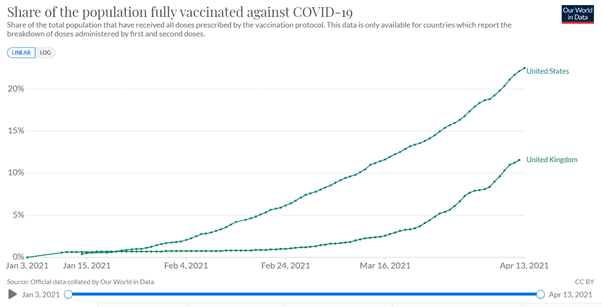 Source: Our World in Data

Various strains of the virus have halted rollouts in certain parts of the world, including South Africa. AstraZeneca was found to be ineffective against the South African strain. Further concerns about blood clots caused a complete halt of the same vaccine in parts of Europe. Johnson & Johnson’s vaccine is also under investigation by the FDA (Food and Drug Administration) for causality between rare blood clots and their vaccine. South Africa also suspended the vaccine temporarily.

South Africa’s rollout has been lacklustre at best, hampered by uncertainty around the efficacy of the vaccines against the South African strain and lack of supply of the best vaccines for our conditions. Just under 300 000 people have been vaccinated. Government plans to roll out phase 2 in May where a bigger part of the population could get vaccinated with either the Pfizer vaccine or J&J – if the suspension is lifted.

The risk in the delayed rollout could lead to a third wave of infections. Government held off on any major changes during the Easter weekend and time will tell whether the virus spread has been kept under control.

The key to a post-Covid recovery globally is how quickly the economy can grow again. A return to some form of normality would have a massive boost on industries that were left behind, such as tourism and hospitality.

The International Monetary Fund (IMF) revised expectations upward and expects 6% growth for 2021 . The United States and China have been leading the way in driving growth. This is encouraging for South Africa as our exports to these nations are crucial to boosting growth locally. The IMF forecasts local growth to be  3.1% for the year.

A primary driver to look out for is inflation, a key indicator of the increase in consumption. South Africa’s inflation figure for the year ending February 2021, was a mere 2.9%. This was the main reason that the South African Reserve Bank kept interest rates unchanged at 3.5%. It is expected that inflation would increase over the course of the year as the economy gets back into full swing. Increased inflation, within limits, is not a bad thing. It signals growth and potentially indicates a recovery in our economy.

In the US, President Joe Biden has been in office for almost 100 days and has made some significant headway, especially in battling the Covid-pandemic. He managed to get a $1.9 trillion stimulus package signed in order to revive the US economy and put a once-off paycheck in most Americans hands which would further lead to increased consumption.

In South Africa, we have a tug of war between two factions within the ANC. Ace Magashule remains defiant on the step-aside resolution tabled by the National Executive Committee for all implicated in corruption. Jacob Zuma has now had his hand forced and is expected to pay roughly R16 million in legal fees. In addition,  we saw 402 politically connected people arrested in 2020 for corruption. It certainly feels like the noose is tightening for some of these politicians.

Markets had one of the best starts to a year in recent memory, with the JSE up 13% in the first quarter. South African equities beat both developed and emerging markets over the period with some big companies posting surprising results to the upside. One of these companies is Woolworths who refocused attention to online sales and pricing and managed to increase sales in the second half of 2020 by 5.3% compared to the same period in 2019. Resources remained the darling of the JSE with increased demand globally, pushing commodity prices higher. Resources are up 21% for the quarter. Interestingly, on a 3-year basis, the local market is still lagging our emerging market peers. If we couple that with low comparative valuation metrics there is still a case to be made for South African equities.

It has never been more apparent that remaining invested has been the best long-term strategy. Since the downturn in equities one year ago local markets have rallied by 77% and the Rand has recovered significantly from the R19 range against the dollar. All of this whilst cash would have given you just under 5% for the year. Investors attempting to time this rally would have struggled as signals of a market recovery at the time were non-existent.

Closing off with a quote from John Bogle, “Time is your friend, impulse is your enemy”. Often, we direct our attention away from our long-term investment objectives and instead react to events that focus on short-term returns.  Typically, these impulses do not lead to better outcomes. We cannot rid ourselves of impulse, but we can, with good financial planning and systems, make considered decisions that grow our investments consistently.