What were the main themes during quarter 2?

The USA stock market fell by 8.3% in June to record its largest first-half contraction since 1970. As it became apparent that inflation was a stickier problem than previously thought, and that drastic policy action (read dramatically higher interest rates) was required, the market adjusted quickly. 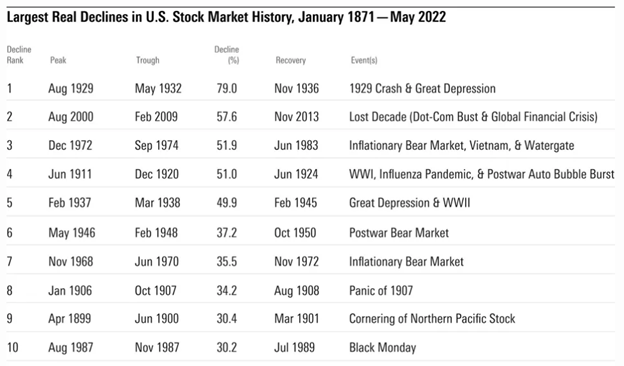 The war in Ukraine drove inflation over the edge. Predictions about inflation being transitory were forgotten, the pinch felt worldwide. China’s Covid Zero policy squeezed supplies while oil, grain and other agricultural exports from Ukraine and Russia halted. This put pressure on important input costs like fuel, manufacturing materials and food.

What should we do?

Once again, we are experiencing how quickly financial markets adjust when expectations change. Remember that markets look forward, not backwards. It is futile to try and predict these rapid changes, and even more futile to try and react to them. Yet, it is at this point that many investors want to bail from their long-term investment portfolios.

Don't turn to cash as a safe haven at a low point. It could be catastrophic. You will erode value as you are selling after an aggressive downturn. Also, cash won’t keep up with inflation as interest rates are still lower than inflation in most countries.

The graph below is an illustration of valuations. It is also a good gauge of where shares were towards the end of last year. Paying 30 times the expected earnings is excessive. It shows how over-excited investors were about future prospects towards the end of last year. Exuberance was almost on par with the levels seen before the credit crises. Markets have cooled off since then to more realistic levels. Long-term investors in well-diversified portfolios can expect reasonable returns from these levels. However, further declines can't be ruled out.

Will all investments rebound?

Unfortunately, no. Some investments may never recover as expectations were based on completely unrealistic promises. Sometimes new investors believe that a new, special kind of investment requires a new way of thinking. Typically, these are investors who have never been burnt by a collapse.

When a child touches a hot stove, the child gets burnt. The child is unlikely to touch the stove again. But that doesn't prevent other children who have never touched a hot stove from trying it out.

In the 1600s people believed that tulip bulbs were a stellar investment opportunity. History refers to it as 'Tulip Mania' which gives some indication of its outcome. In the 2020s, we have seen people buying pictures of rocks and monkeys, priced in the millions of dollars, as they too believed they were a stellar investment. In both instances, the losses were significant (see the graph lower down). Why? Because the expectations were unrealistic. 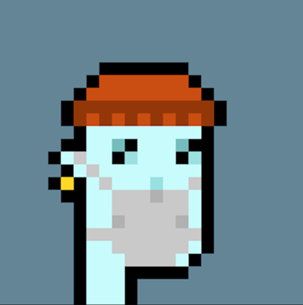 What has happened in South Africa?

In South Africa, we have again been plunged into darkness. Maintenance and illegal strikes have pushed the Eskom grid to the brink of collapse. The result is Stage 6 load shedding, last experienced in 2019. The graph below shows the severity of our electricity rationing. Sobering, considering we are only halfway through the year. 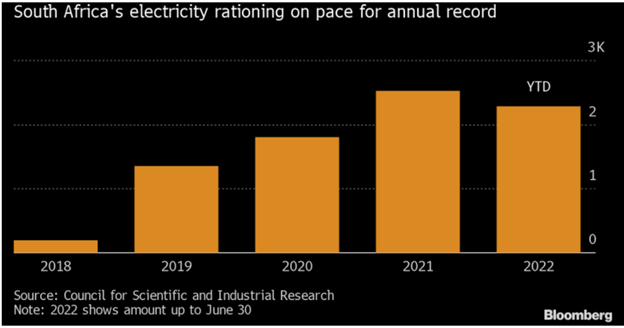 Despite the Eskom woes, there have been some positive readings coming out of South Africa. Retail sales grew, GDP growth has been better than expected and revenue collection by SARS continues to surprise. The budget deficit is also much lower than predicted, and the balance of payment is the healthiest it has been since the dawn of democracy in South Africa.

These improvements have not escaped the attention of global credit rating agencies. Our credit rating was pushed up a notch with rating agencies making positive comments about the improved management of the economy. But Eskom remains the biggest immediate threat to further improvement. Ongoing electricity supply constraints increase the likelihood of a recession in South Africa.

For the first time in decades, South Africa’s inflation rate is lower than that of the USA (7.4% vs. 9.1%) and most developed countries. Our interest rates remain well above inflation. This means that we are one of the only countries in the world offering positive real interest rates.

The chart below illustrates real yields for countries (nominal interest rate minus inflation). It shows that South Africa has one of the highest real yields globally. We do believe we are in a better position than some of our peers on this chart (Brazil, Russia and China spring to mind).

What has happened in financial markets?

There was nowhere to hide during the second quarter in financial markets. Except for cash, every asset class declined. South African shares fell by 21% in dollar terms this past quarter as commodities came under pressure.

The dollar strengthened against all major currencies as the Federal Reserve aggressively increased rates. This could bode well for our export-heavy index as most prices are quoted in dollars.

Investments in asset classes with previously unjustified expectations have suffered even worse fates. The graph below illustrates how NFT index investors (those pictures of monkeys and rocks amongst other things) lost around three-quarters of their value. We are sceptical that this index will ever recoup its losses. NFTs will not disappear but perhaps the way people value them will change.

It is never easy to see negative performance on our portfolios. But our diversified portfolios have held up well. It motivates us to see that our investment process is effective in meeting our clients’ goals.

As Buffet said, “Only when the tide goes out, do you discover who has been swimming naked.”

What can be expected in the second half of this year?

Globally interest rates will continue to rise as governments battle to get inflation under control. It will put a brake on economic activity and, we hope, result in a lower oil price.

In South Africa, there will be lots of political noise as we near the ANC’s conference at the end of the year.

It is unlikely that our news flow will turn positive anytime soon. However, financial markets are already pricing in the negative news. This means they are reaching more reasonable valuations. It is not inconceivable that markets could move against news flow in the short term.

Interestingly, the last time the US market performed as poorly in the first half of the year (1970), the market regained all the losses by year-end. 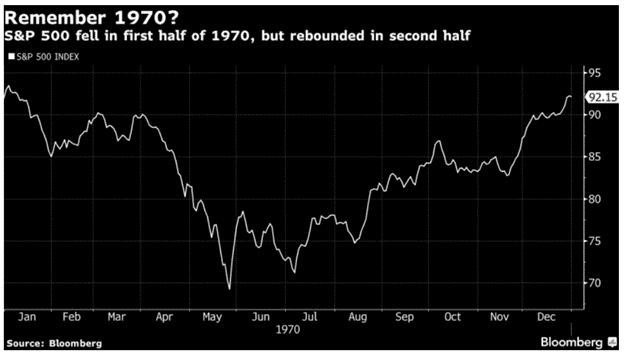 We are not making a prediction. But hopefully, this graph will remind investors that this is not a good time to sell, but to keep to their long-term investment strategy. And for those hoarding cash until news flow improves, you may miss out on an opportunity.