A quarter with positive data and signs of economic stability was yet again marred by political turmoil. Local inflation slowed down to almost 6%. The current account deficit narrowed substantially and there was a general uptick in appetite for emerging markets. For a moment it seemed that South Africa was on the recovery path. All of this was undone with the cabinet reshuffle and firing of Finance Minister Pravin Gordhan at the end of March.

Abroad Trump has signed 34 executive orders to date. Therese May signed Article 50 to trigger Britain’s exit from the European Union. And in the East, tension is rising as America is at loggerheads with North Korea about nuclear missile testing – while China sits on the fence. The French are heading to the polls, which may spark the newly coined Frexit (French Exit from EU) although first round voting results have calmed these fears somewhat.

Locally, both S&P and Fitch downgraded South African debt following the cabinet reshuffle. Moody’s will also make a decision in the coming weeks.

The downgrade has three major consequences:

The JSE rallied just under 4% in the first quarter with Industrials as the star performer. Barring financials which were hit in the last week of March, all major sectors showed positive returns. Emerging markets were the overall winners as investors sought growth opportunities. The Global Emerging Market index was up 11.4% (in dollar terms) for the quarter.

The Rand initially remained calm after the ratings downgrade but eventually depreciated to around R13.95/USD. However, it seems that strong demand for the Rand after quarter end continued and pushed the currency back below R13/USD.  There seems to be continued demand for emerging market investments from global investors and compared to other emerging markets like Turkey and Brazil, South Africa’s current problems do not seem to concern these investors. 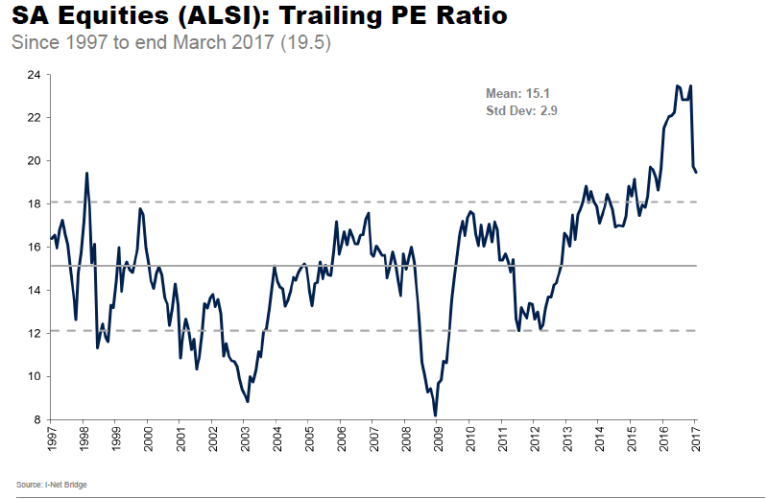 Positive earnings posted pulled the P/E Ratio closer to the longer-term averages. As mentioned in previous reviews, the P/E is affected by the big industrials such as Naspers and Richemont that have been in expensive territory for some time. It also excludes some major resource companies due to negative earnings results. On face value – this graph would indicate a “cheaper” market than in 2016.

Heightened tension out of the East pushed the gold price higher in the first quarter.  Russia backed Syria after it was alleged that the Assad regime used chemical weapons on their own people. The US followed with a missile strike on a Syrian airfield where the chemical attack was launched.

Furthermore, North Korea tested nuclear missiles as President Trump arrived in China and the US dropped the “Mother of All Bombs” (MOAB) on an ISI target in Afghanistan. All of this contributing to the anxiety and the rush to the safe haven metal.

South Africans are in for an interesting ride. There was widespread outcry and protest against Zuma and his unprecedented cabinet reshuffle. With another motion of no confidence set and a request for a secret ballot to be heard by the constitutional court, it will certainly be a quarter to remember. It appears that Zuma will remain President until at least the ANC’s electoral conference in December. It is clear that there is a growing divide within the ruling party with more members becoming vocal on the damage caused by the President.

As the National Conference moves ever closer, there are already candidates on the campaign trail. Dlamini-Zuma, President Zuma’s ex-wife is seen to lead the Zuma loyalist camp. We have seen how vocal the Youth League and Women’s League are in support of this faction. On the other side, you have the reformists, who could be led by either Cyril Ramaphosa or Dr. Zweli Mkhize. It is certain that there will be a lot of noise and that the divide within the ANC is almost certain to grow – especially as the stakes are getting higher. 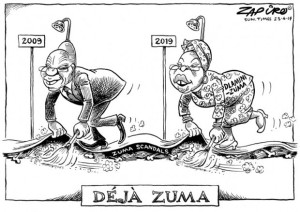 We live in uncertain times with a number of outcomes that can weigh in on investment performance. We remain of the opinion not to position our clients’ portfolios in anticipation of certain events. A diversified portfolio will give us the necessary exposure to be hedged against any one specific event no matter the outcome.

There is a danger that due to uncertainty, investors, like dears in headlights, do nothing, or worse pull out of their investments. The last quarter is a good example of how, in uncertain times, investments can still return positive results.

In closing, we leave you with the following quote:

“I can guarantee one thing: Those who put an investment program in place will have a lot more money when they come to retire than those who never got around to it” - Noel Whitaker.